Ok, so an odd thing happened trying to print the other day. I share a USB printer from my Mac to other computers on the network. After unplugging the USB cable from my Mac at one point to move some stuff on my desk and then plugging it back into the same Mac, printer sharing for this printer no longer worked.
Symptoms:
I could print fine from the computer connected directly to the printer via the USB port. I share it with three other computers and none of them could print to the printer, although they could see it on the network.
When I tried to print from a networked printer the document would simply never print. When I opened the printer queue on the computer I was trying to print from it said: 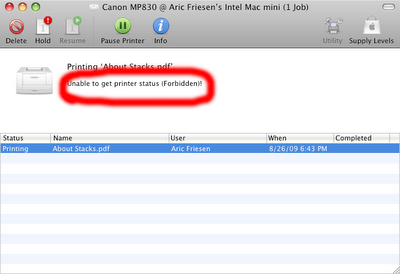 Unable to get printer status (Forbidden)!
Also if I tried to add the printer to a computer that wasn't using it previously, although the computer could see the printer, it could never choose the correct printer driver. 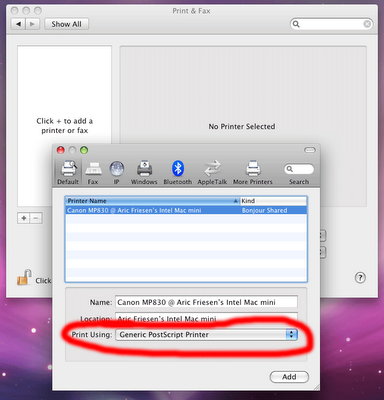 Here’s the fix:
On the computer sharing the printer (the one the printer is connected to) you have to reset the printing system. Just open Print & Fax in System Preferences and right click in the list of printers and chose “Reset printing system…” 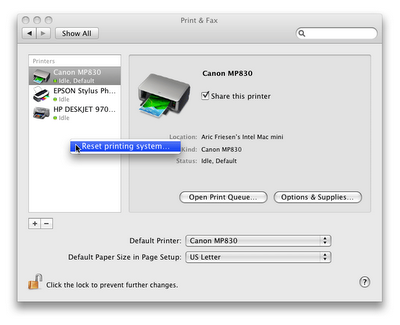 It will ask you if you are sure, and you’ll have to supply an administrator password. That will remove all your printers.
Then you can click the + button and add them manually, however, I found it was easier to power cycle my printer and it was automatically added to the list. Make sure to check Share this printer and you may have to turn on Printer Sharing in the Sharing control panel too. The Print & Fax control panel should notify you if Printer Sharing is not enabled.
You may have to remove and re-add the shared printer on any of your networked computers you wish to print from. Two of my computers started printing to the printer with no problems, but one of them had selected the wrong driver (a generic postscript driver.) You could tell it was wrong because the printer icon didn’t match the one on the computer that the printer is connected to. 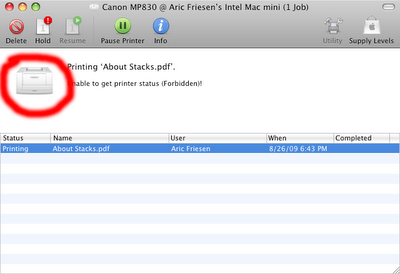 It could still print ok with the wrong driver but it couldn’t access any of the printer’s settings such as paper type or print quality.
Here’s things I tried that didn’t work:
Posted by Aric at 7:21 PM

Today, as a part of general Leopard printer setup, I found that I could not print via Bonjour (from my iBook, over Wi-Fi, to my Power Mac, where the printer is attached.)

I kept on getting "forbidden" errors. After some searching, it would appear that my /etc/cups/cupsd.conf file was woefully out of date. I think it may have been improperly upgraded (or not upgraded at all) at some point between when I was using Mac OS X 10.4.11 and now.

In case others are seeing this problem, here's what I did.

I used the web-based cups configuration tool for everything. To access it, run a web browser on the computer hosting the printer and visit http://localhost:631. This brings up the CUPS management interface - it lets you do a lot more than the System Preferences will let you do.

From there, click on the "Manage Server" button. You will be prompted for authentication information - provide the user ID (short username, not the long name) and password for an administrator. Then click on the "Edit Configuration File" button, under the Server group. In my case, I found the following lines:

This blocks access from all non-local users, effectively killing printer sharing. Remote users can see the printer but can't print to it. I removed the "Deny From All" line and saved the config file. Remote printing started working.

I didn't stop there, however. Out of curiosity, I checked the cupsd.conf file on my iBook (which came with 10.4 pre-loaded, vs the 10.1 that was preloaded on my PowerMac), thinking that there was probably a botched upgrade somewhere along the line. The iBook's configuration file was completely different, matching the /etc/cups/cupsd.conf.system_default file.

So, as a test, I backed up my (now working) /etc/cups/cupsd.conf file and tried to start over from scratch. Within the CUPS web interface, I edited the config file and clicked the "Use Default Configuration" file button. Then, back at the server administration page, I checked the boxes for "share published printers", and "allow users to cancel any job" and clicked the "change settings" button. Remote printing remained operational.

So, to others that may be having problems with CUPS, I recommend trying the same thing. Use the CUPS web interface, reset the configuration file and then turn-on those features you need/want, and see if it works any better."

Thank you for saving my bacon. Been spending days trying to figure out why my sharing wasn't working anymore. Just had to come up with the correct google question to find you here. Really. Thank you.

I had a similar issue where were added another printer to share but then no one (4 computers in our network)was able to print - either to the new or old printer. So we reset the printers for the main/default unit and that solved the issue.

I enjoyed the tips you are providing on your website. Remote Computer Repairs can make one’s help technical service. Thanks for the information……..

hi...Im student from Informatics engineering nice article,
thanks for sharing :)

Thanks for review, it was excellent and very informative.
thank you :)

Thanks for review, it was excellent and very informative.
thank you :)

Thanks for solving Printers sharing Problem
All Printer Support


There is a reason why I bought a Mac, it was not to be one of the cool kids that wanted the best of the best. No it was because of the music production I do on it. Hours and hours sitting in front of my Mac copying, pasting, moving, deleting, hour after hour just beating on my Mac in a endless assault to get my work done. That is the key part, my work. I work from home, it is great, but even if it is from home it is still work and it still needs to get done. So my Mac, I have it because it is fast, gets the job done and comes back for more.

But what happens when it doesn't want to do those things anymore?

I move around massive amounts of information and yes even on the almighty Mac this can cause a problem after a while. Things fragment, programs get corrupted issues come up. My light speed Mac slows down to a crawl and all of the sudden I simply can not get any work done. Because I work from home there is no IT guy to call and ask to come fix it. No instead I have to figure out what is wrong. I am lucky, I did, but not after trying everything under the sun first and wasting countless hours looking for one program that can do what I needed instead of ten programs. One program to lead them all….okay that was a lame Lord of the rings reference, but that program was/is Detox My Mac. A simple to use program that did not just fix my issues, it put my Mac on overdrive again. A few clicks and my Mac was clean and ready to rock and roll again.