QuickTime and a decompressor are needed to see this picture.

So you've been laboring over that PowerPoint presentation or Word document on your Mac for hours or even days.  When it was time for final delivery you opened it up on a Windows OS based computer under Office 2003 or Vista or some other version and found that wherever you put a picture the image isn't displaying and instead it just says

Also note that the file compatibility toolbox on the Mac version will not warn you of this issue when that's the whole point of that toolbox.  As far as Office for Mac is concerned, the file will be 100% compatible with Office for Windows.

I'll first explain what causes this problem and then we'll talk about a fix.

So the only time you will see this is if you were woking in Office on the Mac, added pictures to your document via either drag and drop or copy and paste, and then open your document in Office for Windows.

Ok so what causes this issue?

The truth is it is a bug in how Office for the Mac supported drag and drop and copy and paste.  It used a Mac OS Specific way of embedding the image that Office for Windows can't understand.  Even if you install QuickTime in Windows, Office for Windows still can't make sense of the image information.  This bug was finally fixed with the Mac Office 2008 Service Pack 1 (12.1.0)

Another solution that I've tested is to import images using the Insert menu instead of using drag and drop or copy and paste.  Yes that means if you are trying to use an image from the Web, you must save it from your web browser to your computer's disk first, then import it into Word.  In fact, you can safely drag and drop an image file from your computer's disk drive (from a window in the Finder) to Word and it works fine.  It's only if you drag and drop (or copy and paste) an image from your Web browser or another application and drop it into Word that causes the issue.

Another solution is provided here by Stephen Rindsberg.  He provides some VBA code that you could run on a problematic document in Mac Office 2004.  I tried it and it worked...some.  I found it fixed about 70% of the images, but several were still not working in Office for Windows.  Also any image it fixed it brought to the front of the document, so for example, if you had a back ground image in a PowerPoint file, after running the VBA code, now it would appear in front of all of the text on that slide.

So the best solution seems to be to use the latest version of Office for the Mac 2008 or always import your graphics files from local copies on your computer's drive.  BTW If you need to use Office 2004 (for example you need support for VBA which was dropped in 2008) you will be happy to know you can safely install 2008 on a Mac that has 2004 (as I indicated in my previous blog entry about why I'm still using 2004), and at the end the installer will ask you if you want to remove 2004.  Just say NO and both 2004 and 2008 will exists happily together on the same Mac.

This doesn't cover movie files, only images...
If you are searching you may find this Microsoft Support article: You receive a "QuickTime and a Video decompressor are needed to see this picture" error message when you try to play a movie in a slide view in PowerPoint  Although the description of the problem seems similar, it's a different situation and is specific to movie files and not images.

Ok, so when Mac Office 2008 came out this year, I was pretty happy to upgrade.  After all, 2004 was four years old, and because I had an Intel Mac it had to run under Rosetta which means it ran pretty slow.
Office 2008 promised faster speeds for Intel Mac owners as well as more formatting options and file compatibility with the new Vista Office (DOCX, etc.) formats.
Well, I've installed 2008 and decided to go back to 2004 and here's why...
First Excel and PowerPoint for 2008 do seem improved and ran at least as good if not faster then theri 2004 versions on my Intel Mac.  They had obvious improvements in the user interface and PowerPoint had some really nice graphic enhancements.  Word however, actually runs slower.  Even though now it is running naitive on my Intel processor.  Worst, Microsoft removed Visual Basic for Applications (VBA) from Office 2008 so all those Excel spreadsheets with fancy Macros that I have to use for my job won't work on it.  Lastly I have a relatively simple newsletter template that I use a few times a year, and in 2008 it has some formatting issues.  It's hard to explain but if a Microsoft engineer wants to get in touch with me, I'll explain how to reproduce the problem and send them the file.  (Hello Microsoft Mac Business Unit?)
Also Microsoft has released a converter that now allows Office 2004 (and the older v.X even) to open the new Vista DOCX Open XML file format, so another motivation for upgrading to Office 2008 is eliminated.  You can get that upgrade here.
Anyway, so what I've decided to do is keep both 2004 and 2008 installed on my Mac.  They actually run fine side by side.  Just make sure at the end of the 2008 installer app, you do NOT check the "remove 2004" option and you can keep 2004 around for faster Word editing and VBA macro support.
Update:  I've applied the latest Mac Office 2008 updates bringing me to version 12.1.5.  It does seem Word performance has improved a lot.  However, it is still having problems formatting my newsletter template, and I'm seeing this a lot more too: 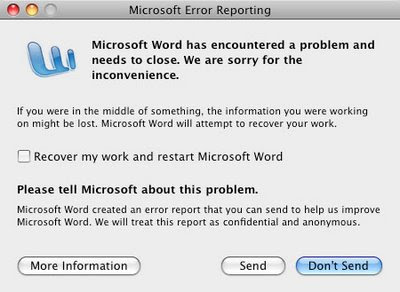